When an Alberta Province’s highway experienced a landslide while the roadway was being rehabilitated, GeoStabilization’s crew provided a temporary shoring solution that saved the road and maintained the construction schedule. A large Canadian prime contractor was working on a bridge replacement and needed to fix small slides that were developing along the approach roads. The lower reaches of the embankment had failed previously, and a fix was tendered to construct a gabion basket wall with reinforced backfill up to the original scarps. However, significant rain and overland flow caused mass erosion on one of the slides, and the resulting scarp progressed quickly to within three feet of the roadway shoulder. If the scarp was not stabilized, the road would fail – impacting two lanes of the four-lane highway. In collaboration with the owner, the owner’s geotechnical consultant, and the prime contractor, Geostabilization designed and installed a soil nail array faced with high-tensile wire mesh in less than a week, keeping the project on schedule and allowing the prime contractor to safely complete the original gabion wall system to replace the failed material. 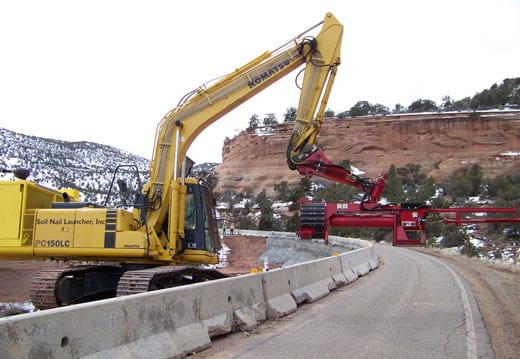