In a suburb outside of Columbus, Ohio an existing stacked stone retaining wall (circa 1960) at the entrance of an upscale subdivision needed to be replaced. The wall was crumbling due to gravity, and the earth pressures were pushing the wall out at the bottom causing the entire wall to deform. The client wanted to maintain the historic look of the wall, so our goal was to reuse the existing stone as much as possible.

Comments from the client and neighbors:

“It looks great from the drive-bys and the pictures… Your team did a great job and it was so quick!”

“Nice job! We have been trying to figure out the best way to make this wall repair for the last ten years or so. It looks like we found the perfect solution.”

The neighbors were so happy with the crew and their professionalism that they even provided breakfast most mornings! A local general contractor who followed the project’s progress has already reached out to have GeoStabilization bid on one of his projects. Innovation, hard work, and attention to detail – that’s the way GeoStabilization ensures client best value. 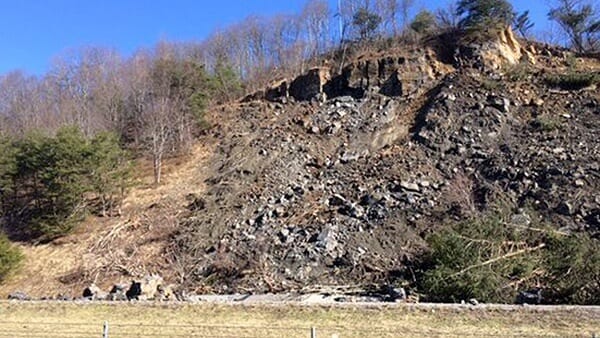 A massive rockfall event occurred along Interstate 75 in TN. Large boulders fell onto the roadway, temporarily closing it.